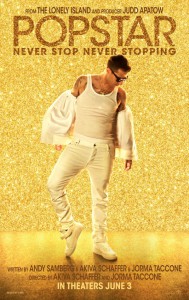 The film follows rapper Conner4Real, (Samberg), as he goes about his day to day life as an international music sensation. The film’s format is a parody of music documentaries such as Justin Bieber’s Never Say Never and One Direction’s This Is Us. The trailer features many familiar faces from the American comedy scene, including Bill Hader, Sarah Silverman and Will Arnett. It also shows cameos from many faces in the music industry, such as Carrie Underwood, Usher, Adam Levine, and DJ Khaled.

From this first trailer, it is clear that this film will adhere to the same humour we’re used to from The Lonely Island boys: it will be crude, weird, and at times ridiculous- but most likely hilarious.

After working for years writing on Saturday Night Live, this is the trio’s first feature length film. It went into production last May, under the production title of ‘Top Secret Untitled Lonely Island Movie’.

Popstar: Never Stop Never Stopping is set to hit US cinemas on 3rd June, with a UK release yet to be announced. Watch the trailer below.