Read more
You are at:Home»News»Global News»Nostalgic News: Pretty In Pink was released 30 years ago today
By Anneka Honeyball on February 28, 2016 Global News, News

John Hughes’ classic teen movie, Pretty in Pink was released in US cinemas 30 years ago today, on 28th February 1986.

Directed by Howard Deutch, the film follows the story of Andie Walsh (Molly Ringwald) – a smart, independent working-class girl who is often subjected to cruel jibes from the popular rich kids at school, because of her distinctive sense of style and introverted demeanour. Her best friend Duckie (Jon Cryer)  harbours a deeply profound love for Andie, but is dismayed when she develops a crush on gentle rich kid, Blane (Andrew McCarthy). When Blane asks Andie to the prom, their friends –  who each come from conflicting social circles – make efforts to break them apart. 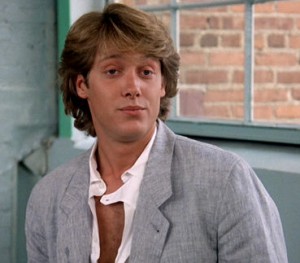 One of the most acclaimed films of the so-called ‘Brat Pack’ era, John Hughes wrote the script with Molly Ringwald in mind. To begin with, Ringwald was reluctant to take on the role, but after seeing how difficult it was for producers to find a replacement, she agreed to star in the film. Jon Cryer’s fairly iconic characterisation of Duckie also could have been very different; Anthony Michael Hall (The Breakfast Club, Weird Science) was originally cast in the role, but later dropped out for fear that he would be typecast as a “geek.”

The film also features a dazzling supporting cast, including the likes of Harry Dean Stanton, Annie Potts and James Spader, who plays arrogant playboy, Steff. Spader’s cunning performance as Blane’s vindictive best friend is perhaps one of the highlights of the movie, as he steals every scene with his smug swagger and effortlessly hip one-liners.

The film, which was named after the 1980 song of the same name by The Psychedelic Furs, is renowned for it’s soundtrack – which has frequently been rated as one of the best in modern cinema. As with other John Hughes films, the soundtrack consisted mainly of new-wave music, including songs by New Order, INXS, Nik Kershaw, Echo and The Bunnymen, Orchestral Manoeuvres in the Dark and The Smiths. The film also features Otis Redding’s rendition of ‘Try A Little Tenderness’, which Duckie memorably lip syncs in one scene.

Earning an impressive $40,471,663 during it’s theatrical run, Pretty in Pink has since become a cult classic, as well as one of the defining teen movies of the era.

Pretty in Pink is available to watch on Netflix. Watch the original trailer below.