Read more
You are at:Home»News»Global News»Tye Sheridan cast as lead in Ready Player One
By Sophie McEvoy on February 25, 2016 Global News, News

Tye Sheridan (Mud, X-Men: Apocalypse) has been cast as the protagonist Wade Watts in Steven Spielberg’s upcoming adaptation of the novel Ready Player One.

Spielberg gave an open casting call for the role of Wade, going through traditional routes of agent-submitted calls first and then opening auditions to the world via the internet. However, Speilberg had Sheridan sign a holding deal – before the open auditions started – after his audition as he liked what he saw, and it looks as though he found his Wade early on in the game. 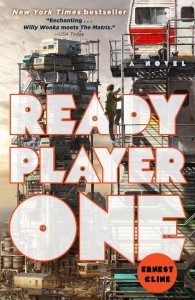 The film is based on Ernest Cline’s acclaimed novel of the same name. (Image via Google)

Written by Ernest Cline, Ready Player One is set in the distant future – 2044 – and focuses on teenager Wade Watts, an orphan who escapes his dreary world through the global networked virtual universe called the OASIS; a place where you can lead a virtual life of your choosing. Upon the death of OASIS’ creator, he launches a contest to look for a hidden Easter egg within the virtual reality.

Whoever is able to find this prize is deemed to receive his fortune and gain control over the OASIS. Wade takes on the challenge – in the form of his avatar Parzival – to find the Easter egg, and ends up being the first person to complete the first step. He brings the egg hunt back into the spotlight – garnering interest from an evil corporation named Innovative Online Industries (IOI) in the process.

Ben Mendelsohn and Olivia Cooke had already been cast, with the former portraying the CEO of IOI, Nolan Sorrento and the latter portraying a Canadian blogger who goes by the avatar Art3mis.

Get a feel for the film adaptation through a trailer of the book below.