Read more
You are at:Home»News»Global News»Adele sweeps up trophies at the 2016 Brit Awards
By Anneka Honeyball on February 25, 2016 Global News, News

Adele has dominated the 2016 Brit Awards, sweeping up four of the biggest prizes, including Best Female Artist and Best Album.

The singer, who later closed the ceremony with a live rendition of ‘When We Were Young’, also won Best British Single (for ‘Hello’) and the Global Success award. With her latest wins, Adele has equalled the record set by Blur in 1995, for the most awards picked up in a single ceremony. 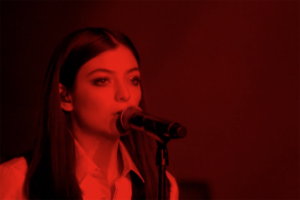 Lorde led a poignant tribute to the late, great David Bowie, who died in January. (Image via Google)

Meanwhile, Coldplay opened the show with a colourful performance of ‘Hymn For The Weekend’ before later picking up the award for Best British Group. This latest award (their ninth) makes them the most successful band in the ceremony’s history.

The ceremony – which was hosted by Ant and Dec – also saw a poignant tribute to David Bowie, who was posthumously awarded a Brits Icon Award. Annie Lennox and Gary Oldman lead an emotional tribute to the late singer, before his live band entered into an instrumental medley of his greatest hits. Lorde completed the tribute with a powerfully understated rendition of ‘Life on Mars.’