Read more
You are at:Home»News»Global News»‘The X-Files Origins’ YA novels to be released next January
By Sophie McEvoy on February 23, 2016 Global News, News

Following the success of the recent revival series, two new X-Files novels are set to be released next January.

The two novels – entitled Agent of Chaos and Devil’s Advocate – will follow 17-year-old Mulder and 15-year-old Scully as we delve deeper into the agents’ history. 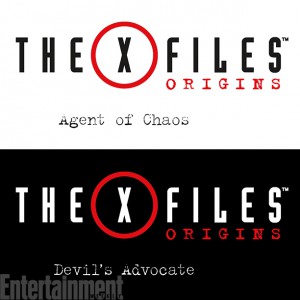 A first glance at the titles of the novels. (Image via Entertainment Weekly)

Garcia is known for her co-authoring of the Beautiful Creatures and Dangerous Creatures series, as well as her solo series The Legion. Meanwhile Maberry is a thriller and horror novelist, best known for his novels Assassin’s Code, Dead of Night and Patient Zero. He is also a Marvel Comics writer.

Erin Stein, a publisher at Imprint, issued a statement about acquiring the two novels: “When I watched the pilot episode back in 1993, I became immediately obsessed with The X-Files. As a die-hard fan of the show, the oppurtunity to work with incredible authors on original stories about these characters is a dream come true for me. Why did Mulder become a believer? Why did Scully become a skeptic? We get to tell those stories.”

Both novels are set to be released simultaneously in January 2017.