20 years ago today, on 23rd February 1996, the UK was graced with the release of Danny Boyle’s second feature film, Trainspotting.

Based on Irvine Welsh’s cult novel of the same, the film offers a brutal yet humorous depiction of heroin addicts in an impoverished area of Edinburgh in the nineties. Unlike the novel, which is written in a raw Scottish dialect and focuses on a different character in each chapter, the film is considered by Welsh to be a “remix” of his debut novel. Trainspotting stars Ewan McGregor as the cynical yet witty Mark Renton in a wonderful performance that gained him worldwide recognition, and lead to his eventual starring roles in the Star Wars prequel trilogy and Moulin Rouge. 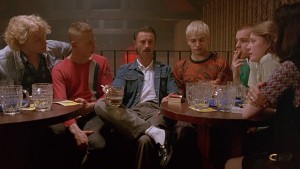 The gang together on an outing to the pub. (Image via Youtube)

Having seen the film on numerous occasions, it’s definitely something that you can go back to and not get bored of! The editing is very fast-paced, adding a sense of surrealism to the scenes. For example, Renton moves from a pub and jumps to his dealer’s den in an instant; in a sequence most likely shot to reinforce his desperation for a hit. The soundtrack is also excellent and was heavily used in the marketing of the film, featuring hits by musicians the gang grew up with such as Iggy Pop and Lou Reed, alongside contemporary dance and Britpop tunes such as the anthem ‘Born Slippy’ by Underworld and Pulp’s ‘Mile End.’

The overall film focuses on the friendships between each gang member formed through a culture of drug use, from Jonny Lee Miller’s junkie Sick Boy to the psychopathic and ultra-masculine Begbie (Robert Carlyle), who instead chains cigarettes, booze and bar brawls. Upon its release in 1996, the film was an immense box office success and like the book gained a massive cult following. Danny Boyle was also highly praised for his direction of the film, going on to direct bigger budget films such as The Beach as a result of the film’s success.

Considered one of the greatest British films ever made, Trainspotting has since been commissioned for a sequel, with Danny Boyle returning as director alongside the original cast. The sequel is expected to arrive in UK cinemas at some point in 2017.