The initial line-up for this year’s V Festival has been announced, with Justin Bieber and Rihanna revealed as the headline acts for 2016. 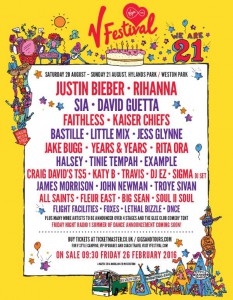 Rihanna’s appearance at the festival will coincide with the UK circuit of her Anti World Tour. Meanwhile, Bieber will make a brief appearance for the festival season, before returning to the UK in October for his Purpose World Tour.

The festival, which this year celebrates it’s 21st anniversary, will take place from 20th-21st August 2016. The general sale for tickets will begin on Friday 26th February from 9:30am. Virgin Media customers can purchase pre-sale tickets now.