Read more
You are at:Home»News»Global News»Taylor Swift and Kendrick Lamar sweep awards at The Grammys
By Anneka Honeyball on February 16, 2016 Global News, News

Swift won the coveted title of Album of the Year for her tremendously successful album, 1989, which also won Best pop vocal album. The singer picked up a third award for Best Music Video in recognition of her star-packed visual for ‘Bad Blood.’ 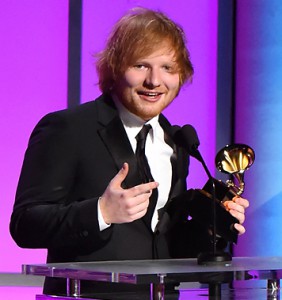 Our very own Ed Sheeran won his first ever grammy awards last night. (Image via Google)

Kendrick Lamar was the most successful winner of the night, winning a total of five awards including Best Rap Album. Meanwhile, Ed Sheeran won his first ever set of Grammys, picking up the awards for Song of the Year (‘Thinking Out Loud’) and Pop Solo Performance.

Justin Bieber and Adele also performed on the night, with the latter fazed by technical problems with her microphone.

The full list of winners can be found on the Grammy website. Watch Lady Gaga’s Bowie tribute in the video below.