Read more
You are at:Home»News»Global News»Notes on News: Why popular culture needs to stop putting ratings before health
By Brunna Pimentel on February 9, 2016 Global News, News

After just two weeks of being on air, Channel 4’s reality sporting show The Jump has seen many of it’s contestants landing in the hospital. The latest casualty has been Olympic gymnast Beth Tweddle, who had to have surgery on her neck following an incident during training. Previously, fellow Olympian and swimmer Rebecca Adlington was pulled away from the competition after dislocating her shoulder following a crash during filming for the first episode, as has Holby City actress Tina Hobley, who fractured her arm in two places. Posited as a ski-jumping reality show, the programme shows many celebrities attempting extreme sports in order to claim a victory title, with other casualties including Linford Christie, Louisa Lytton, Sid Owen, Mark-Francis Vandelli and James Argent.

Here’s the bottom line: the reality show is dangerous and it is no joke. Tweddle, the latest participant to get injured, has had to undertake serious surgery wherein some bone from her hip was removed and used to fuse the two vertebrae that were fractured on her neck. While the content of the media has become increasingly dangerous, people have expressed concern for what the media is imposing on the health of the participants in order to increase ratings. Some might be attempted to adopt a nonchalant attitude towards this issue. After all, the participants are all consenting adults who know about the dangers of being in this show. Many people will do just about anything for five minutes in the spotlight. In addition, the more that some celebrities fear going from fame into oblivion, the greater the lengths they seem to go to reclaim their supposed right to the spotlight. Furthermore, it could be argued that Channel 4 is just doing what it must to survive, for otherwise, with just a click of the remote, the viewer can and will switch to another channel that will supply this kind of reality show. 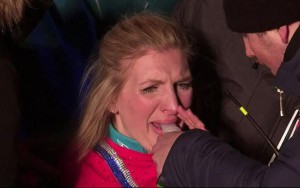 Rebecca Adlington was left in agony after she dislocated her shoulder during a jump.

But all that doesn’t seem to get to the heart of the problem or help to capture the essence of why this particular show is especially dangerous and in need of axing. What is so alarming about The Jump is the lack of preparation the participants have for such a dangerous sport. Most of these people lack the years of experience that most athletes have, and if hundreds, even thousands of athletes get hurt in spite of their experience, what is to be of these inexperienced celebrities? It seems that ratings were all that Channel 4 was concerned with. Since people all across Britain tune in to the channel on a daily basis, it is their obligation to act as role models. In my opinion, this show should never have been approved for production.

It cannot be denied that in this technological age, there will always be other outlets where people can watch videos of other people doing dangerous things in order to entertain others. It would be nearly impossible to censor videos of this kind across all the possible mediums. The Jackass movies have attracted millions by showing a group of guys purposely doing the most stupidly dangerous things in order to amuse and entertain audiences. Another example is Dirty Sanchez, a British TV series which depicts three Welshmen and one Englishman harming themselves for entertainment. And then there’s also the popular Facebook star, Ben Reeves whose claim to fame is eating a range of ill-advised things, from cigarettes to paint. If The Jump gets axed, people will probably find other ways to watch what they desire and, as I think I’ve established, the options are endless.

But that misses the point. Of course there will always be people willing to put their bodies at risk in this way and of course that there is no way to viably censor this kind of entertainment across all technologies and mediums. However, Channel 4, being such a massive public-service television broadcaster, is incredibly influential and they should have known better than to put something like this on air. They should have acted as guardians to these people, just because it is the right thing to do. It is undeniable that people will find ways to put their health at risk if they so desire, but Channel 4 should not have given them the means to do it.