Superbowl 50 is usually a veritable goldmine for promoting upcoming blockbusters and this year proves to be no exception with the release of a new TV spot for the upcoming Marvel hit, Captain America: Civil War.

With only one previous trailer to go by, we finally appear to be getting more and more information regarding how the plot will develop with this new teaser. The trailer itself features an ominous and foreboding background chant of ‘United we stand… United we fall’ which perfectly captures the feelings of both sides –  Captain America’s pro-freedom, anti-registration rebels and Iron Man’s more organised and militant pro-registration regime. 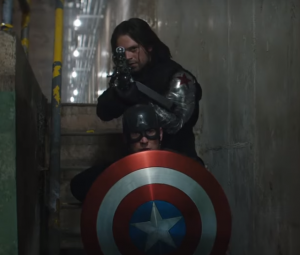 Captain America and The Winter Soldier prove to be formidable allies.

Flashing through, we see shots of Cap and Falcon both surveying the surroundings, before a shot of an angry looking Bucky Barnes (AKA: the Winter Soldier/Cap’s BFF) being urged to hold back. Following this, we see the first Avenger in action mode rolling through an open window and engaging in combat with presumably pro-registration soldiers. A quick snapshot of a shocked Scarlet Witch precedes the best and most emotive moment of the trailer; a powered up Stark grabs Bucky’s gun as he unflinchingly pulls the trigger.

Black Widow is also shown at an airport, watching a series of explosions before we see Iron Man tending to a wounded (possibly dead?) War Machine. A menacing shot of Bucky and Cap is followed by doors sliding open to reveal Iron Man, who coldly states ‘You chose the wrong side.’

A final image pans to show both sides and reveal the key players in the civil war- Team Cap boasts Falcon, Scarlet Witch, Bucky, Hawkeye and Ant-Man, while Team Iron Man has a roster of Black Widow, War Machine, The Vision and the newest member of the franchise making his MCU debut- Black Panther. Although the lack of Hulk is a disappointment, this trailer has certainly done plenty to start the hype train once more.