Following the success of previous fairytale adaptations such as Cinderella (1950) and Alice and Wonderland (1951), Walt Disney turned to the beloved children’s novel by J.M Barrie for inspiration in his 14th animated film. 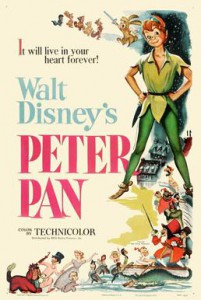 The original 1953 poster for Peter Pan (Image via Google)

Peter Pan is set in 1900 London, and tells the story of the Darling children -Wendy, John and Michael – who meet the eponymous child-like character, when he falls into their nursery after losing his shadow. Once Wendy has sewn his shadow back to his feet so he doesn’t lose it again, Peter, with the help of some pixie dust from his sidekick fairy Tinkerbell, flies back to the magical land of Neverland with the Darling children. Upon arrival, the group stumble into the villainous Captain Hook who wants to lure Pan into a trap as revenge for cutting off his hand. On their adventure, the children also meet the mermaids of the Blue Lagoon, Tiger Lilly, the Lost Boys, Mr. Smee and the ticking crocodile.

Upon release in 1953, the film received mixed reviews with some praising the animation, while others criticised the film for not abiding the same true spirit of the original novel. However, since the initial release, the film has had been praised by many critics and celebrities with Michael Jackson stating it was his favourite film of all time and inspired him to name his private ranch Neverland.

In recent years however, there has been debate on the racial stereotyping of Native Americans in the film as they are depicted as wild, savage and violent and speak in a stereotypically tribal way. Captain Hook even calls them ‘redskins,’ while the Lost Boys declare their plans to hunt them down “like animals.” In recent years, original animator Marc Davies has stated:”I’m not sure we would have done the Indians if we were making this movie now. And if we had, we wouldn’t do them the way we did back them.”

Disney’s Peter Pan is still popular today. It inspired a sequel, Peter Pan Return to Never Land in 2002 which saw Wendy’s daughter Jane meet Peter during World War II. The film has also spawned a fairy series starring Tinkerbell which has run for six feature length films and a TV series on the Disney Channel. Jake and the Never Land Pirates which is aimed at younger children on Disney Junior, was also derived from the original animation.

Remind yourself of the original magic and adventure in Neverland in the trailer below.