Read more
You are at:Home»News»Global News»Notes on News: Why Deadpool’s latest marketing venture is so inspiring
By Sophie McEvoy on January 31, 2016 Global News, News

The recent marketing campaign for the upcoming 20th Century Fox superhero film Deadpool has stayed true to it’s meta roots, taking a completely different approach to film marketing. Not only have several imaginative (and down right hilarious) trailers and billboards graced the world in these past few weeks, but Deadpool has now extended his marketing prowess into public service announcements. In true meta form, the new trailers depict Deadpool (Ryan Reynolds) perching on a pool table, giving viewers the candid advice to “touch themselves” in the name of cancer awareness – in particular, for signs of testicular cancer and breast cancer.

Not only do these videos provide some note-worthy Deadpool puns, but they also give some much needed publicity to the awareness and self-prevention of cancer – a disease that has claimed the lives of thousands, and taken down several goliaths of entertainment in the last month alone. The marketing team behind Deadpool are not only giving real, potentially life-saving advice for men and women to prevent cancer, but the theme also ties itself within the character’s backstory; Formerly known as special forces operative, Wade Wilson, Deadpool is subjected to an experiment – that ultimately gives him super-human powers –  in an attempt to cure his terminal cancer. 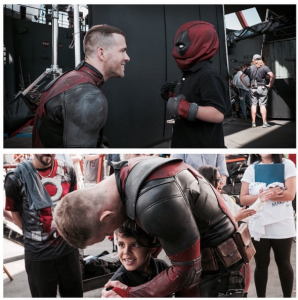 For an anti-hero, Deadpool’s got a lot of heart – the filmmakers also allowed a terminally ill young fan onto the set with the Make A Wish foundation.

What’s really commendable here is that the marketing team don’t just stick to one gender. This could have easily ended up being a campaign aimed towards a male audience – which at a narrow glance could be what the public would assume Deadpool is aimed towards, due to its R rated violence. Both the film and it’s marketing team have been extremely non-biased however, labeling this film as something for everyone – which in this time of questionable diversity, is really commendable.

Not only do the trailers take the time to raise awareness to both testicular and breast cancer, but they do so in two completely separate videos to ensure that both genders are addressed, and have a minute dedicated to the medically approved ways in which they can prevent themselves from succumbing to cancer. Appealing to considerably younger people, the trailers are a great way of getting both men and women to check themselves on a monthly basis, but in a humorous, accessible way. Deadpool doesn’t make the premise of cancer something to be scared about. He just makes it something to be aware of.

Deadpool has already set the marketing bar high with past publicity schemes, but with these new additions, it’s set the bar even higher. It’s a wonder why these sorts of infomercials haven’t been produced before, especially with such influential characters as Deadpool urging fans to get themselves checked out. For a film that’s already known for it’s dark meta humor, the fact that it has been able to tackle such a serious issue with such ease already cements it as one of the best films in 2016, in my opinion. They didn’t need to do this. They were already selling the film without it. But it just feels so right that they felt the need to do it.