Read more
You are at:Home»News»Global News»Notes on News: Why rebooting Labyrinth is an awful idea
By Anneka Honeyball on January 23, 2016 Global News, News

This week, it was announced that Jim Henson’s 1986 cult classic, Labyrinth is the latest nostalgic treasure to be mercilessly rebooted in the name of cashing in on childhood memories. According to The Hollywood Reporter, Tristar have enlisted Guardians of the Galaxy co-writer Nicole Perlman to pen a script for the proposed 21st century reboot. Though it’s unclear whether the reboot will be a contemporary reimagining or a direct sequel is as yet unclear. What seems crystal clear to me however, is just how awful the idea of making either of those films is.

This isn’t to say that I lack faith in Perlman, who as Guardians will attest is perfectly capable at scripting fun and entertaining movies. It’s that I just can’t fathom why anyone would want to dubiously replicate or even build upon such a uniquely nichéd film as Labyrinth in the first place. Though the film is – quite rightly – loved by many, the reasons behind the cult fascination with it are simply unparalleled in this day and age.

Though Jim Henson contemplated upon a number of popular musicians (such as Michael Jackson and Prince) to play the role of the antagonistic Goblin King in the original film, there was only one man who had the star power and utterly unique appeal to pull it off. That man, was of course, David Bowie. To my eyes, Bowie’s involvement in the film is a large part of what makes the original so great, and it’s certainly why people are talking about it so fondly now, in the wake of his death. Not only did he make a blazingly memorable appearance in the movie (what with his big hair, glittery entrances, very tight trousers, etc), he also had a significant impact on the soundtrack. If you ask anyone what their favourite part of the film is, I can guarantee it’ll be one of it’s musical numbers –  all of which would be redundant in a reboot or sequel without Bowie. 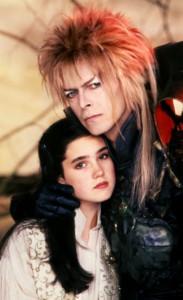 Above: David Bowie and Jennifer Connelly, the stars of Labyrinth.

Quite how you could cast anyone else as Jareth – a role tailor-made for Bowie’s peculiar and very particular oeuvre – is flabbergasting to me. It seems abhorrent to even think about it, when Bowie’s portrayal is so deeply burned in my memory. I don’t want a poor imitation of Bowie or some strangled, updated rendition of ‘Magic Dance’ that’s desperate to somehow live up to or better the original. I hate that I’m even having to refer to the film as the “original” in respect to this new film. And even if the sequel/reboot (smartly) doesn’t go down that route and avoids the musical numbers entirely, I still don’t see the appeal. Though I have a deep, deep fondness for the film, I have no problem in stating that the story at the centre of it all isn’t that great. But then, it isn’t necessarily the story of Labyrinth that inspires it’s cult popularity. That’s the point. It gets away with it’s hokey melodramatic plot elements because of the inherent nostalgia and because every time David Bowie turns up, he steals the scene so eloquently that you don’t even care what’s happening. It’s David Bowie, for gods sake. No matter how much Perlman attempts to fix the story, she’s never going to be able to capture that kind of wistful magic.

And before anyone attempts to pin all my hesitations on my clear (and unabashed) mourning for Bowie, there is more to it than that. Part of the film’s charm, Bowie and nostalgia aside, is that the puppets that brought the Goblins to life were carefully crafted and designed to be physical, adaptable props. Though the Henson company are said to be involved in the new project, there is still a part of me that’s fearful of unnecessary CGI. Yes, the green screen work in the original is a little rough around the edges, but there was something so organic about those physical eighties’ sets. I don’t want any of that to be tarnished by modern effects.

The thing that really perplexes me more than anything though, is that even the original film – with the forces of Bowie, Henson and George Lucas behind it – bombed at the box office. By the end of it’s run in 1986, the film grossed $12,729,917 – a sum that scarcely profits half of the film’s $25 million budget. With this in mind, it seems bizarre that a film studio would invest into a sequel. And even if they’re banking on people’s nostalgia, without the living presence of Bowie, it all seems pointless.

It’s not that I don’t understand the appeal of reboots. I do. The likes of Star Wars, Star Trek and Jurassic World are a testament to how well reboots can work and be immensely popular among modern audiences. But in the case of Labyrinth – though it certainly is old enough to be considered for revival – the appeal just isn’t there. The film was never meant to be a franchise. It’s just a wonderful, weird little gem of a movie that should be left in the nostalgia vaults, unfettered and untarnished.