Read more
You are at:Home»News»Global News»FOX offered Gillian Anderson half of what David Duchovny was being paid for X-Files revival
By Sophie McEvoy on January 23, 2016 Global News, News

For the second time in the show’s history, Gillian Anderson has had to face being offered half of David Duchovny’s pay for the X-Files.

The first time occured in the show’s original run in the 1990s. You’d think FOX would have approached the revival differently, especially due to the spotlight cast upon equal pay and gender equality within in Hollywood in recent years. However, Anderson has since revealed that it wasn’t the case. 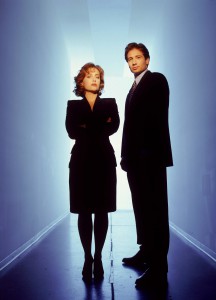 Above: Anderson and Duchovny in the original 1990’s series.

Anderson told the Daily Beast: “I’m surprised that more (interviewers) haven’t brought that up because it’s the truth. Especially in this climate of women taking about the reality of (unequal pay) in this business, I think it’s important that it gets heard and voiced.” Anderson also discussed her first battle for equal pay, saying: “It was shocking to me, given all the work I had done in the past to get us to be paid fairly. I worked really hard toward that and finally got somewhere with it.”

The X-Files was one of the first shows to introduce the apparently foreign idea of a male/female duo on television being equal. Which again, was something that Anderson had to fight for. Originally, FOX required Scully/Anderson to stand a few feet behind Mulder/Duchovny on camera. This was shortcoming, however, as you can see by the third or fourth episode of the first season, when Mulder and Scully equally walk side by side.

“I can only imagine that at the beginning, they wanted me to be the sidekick,” says Anderson. “Or that, somehow, maybe it was enough of a change just to see a woman having this kind of intellectual repartee with a man on camera, and surely the audience couldn’t deal with seeing them walk side by side!”

Eventually, both Anderson and Duchovny were paid the same amount for The X-Files revival, but it still doesn’t cover the shock that FOX originally thought it would be okay to offer Anderson half the pay of her male co-star, when both have equal presence on the show.

The X-Files is set to premiere on 24th January, with the second episode airing the next day on FOX in the US. The show is set to air on Channel 5 in the UK in early February.