Barbara Windsor is bowing out of EastEnders, and this time she’s not coming back.

After 20 years playing the steely Mitchell matriarch Peggy on and off, Windsor left the show in 2010, but has made guest appearances on four occasions since, and is still very much a presence lingering over the Mitchell family, and most notably her son Phil (Steve McFadden). However, today Windsor and the BBC have announced that Peggy will return for a number of appearances over the spring, leading to her character being killed off. 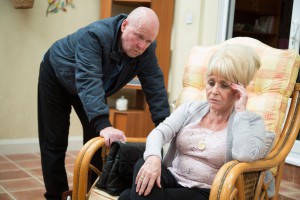 Peggy appeared in a number of scenes alongside son Phil (Steve McFadden) on Friday.

Windsor made her first return to the soap opera in yesterday’s episode (16th January), in an unannounced surprise. In the scene, Phil visited his old ma while searching for his estranged daughter, Louise, but she remained eerily quiet. As Phil began to lash out, Peggy dropped a bombshell; her breast cancer had returned.

Though she refused to reveal any more information to Phil, and he left to find Louise, viewers were left stunned by her shock revelation, and the worst was confirmed in a press announcement by the BBC today.

Windsor said: “Peggy is a character that is close to my heart but I made the decision a while ago that I need to say goodbye to Peggy once and for all, as otherwise she will always be there, urging me to go back.” EastEnders‘ executive producer Dom Treadwell-Collins said her exit, due to air in the late spring, would be “one of the most heartbreaking, uplifting and epic exits EastEnders has ever had.”

The news comes shortly after Barbara Windsor was made a dame in the New Year’s Honours this year. She made a name for herself in the Carry On films, and debuted as Peggy in 1994.