Following the news that beloved British actor Alan Rickman has died, tributes have been flooding in from the many people he worked with over his long and successful career in film.

Daniel Radcliffe, who worked with Alan for ten years on the Harry Potter film franchise, called Rickman “undoubtedly one of the greatest actors I will ever work with”, and “one of the most supportive people I’ve ever met in the film industry.” Radcliffe also praised him on a personal level, calling him “extremely kind, generous, self-deprecating and funny.” 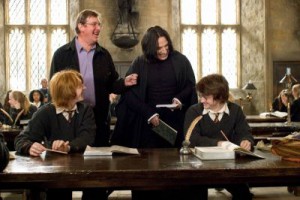 Taking to Facebook for her tribute to the star, Emma Watson (who also worked with Rickman in Harry Potter) lamented: “I feel so lucky to have worked and spent time with such a special man and actor. I’ll really miss our conversations. RIP Alan. We love you.”

Notably upset, Potter author J.K. Rowling took to Twitter to say: ‘There are no words to express how shocked and devastated I am to hear of Alan Rickman’s death. He was a magnificent actor & wonderful man.” In interviews since her book series came to life on the big screen, Rowling has always maintained that Rickman was the perfect actor for her slimy Potions professor, Severus Snape.

Actor Russell Tovey was evidently thinking of the loss of David Bowie earlier this week in his tweet: “Another legend gone, another magical man taken away to entertain the heavens, It’s gonna be mighty fun up there. Rest well Alan Rickman.” TV personality Piers Morgan called cancer – the cause of both Rickman and Bowie’s deaths – “one bloody awful disease.”

Brian Blessed, who worked alongside Alan Rickman in 1991’s Robin Hood: Prince of Thieves, said that he was “a joy to work with; a riveting and magnificent actor.” Meanwhile, Jason Isaacs, another of Rickman’s co-stars from Harry Potter claimed that “Nobody else could be as hilarious, tragic, terrifying & truthful all at the same time.”

There can be no doubt that Alan Rickman will be sorely missed from the world of entertainment. The Edge will be paying tribute to the actor in a special feature, set to be published later this evening.