All Marvel fans will be aware that the upcoming film Captain America: Civil War is based on a pretty major original comic storyline- the Civil War storyline. Critically acclaimed when it first hit comic book stores 10 years ago, this storyline sees the Avengers split in two over the Superhero Registration Act, with Captain America and Iron Man fighting it out over their differing opinions. It’s probably one of the most famous storylines in the series – the fact a major person is killed off (Steve Rogers) at the end is a game-changing moment. But this comic arc had everything: X-Men, the Iron-Spider, Black Panther, Crossbones, Tony vs. Steve. Put short, it was epic. 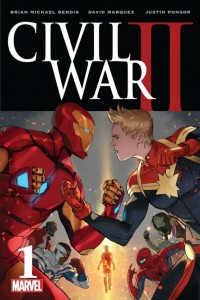 And now, one decade later, Brian Michael Bendis is producing a follow-up. As “Captain America is an old man”, Stark needs a “new punching bag” and this time, his adversary takes the form of Captain Marvel. In a New York Daily News synopsis described the new storyline as a ‘decidedly Minority Report flavoured set-up,’ teasing that a mysterious new Marvel character comes to the attention of the world, one who has the power to calculate the outcome of future events with a high degree of accuracy.’ (So basically The Watcher then?)

This new persona “divides the Marvel heroes on how best to capitalise on this aggregated information.” Whilst Captain Marvel aims to “profile future crimes and attacks before they occur,” Iron Man in the “more ethically upright side of the argument” who believes that “punishment cannot come before the crime.”

In an interesting twist, roles have reversed. Spiderman, Tony’s ally from the first Civil War now stands against him, alongside Cap Marvel and She-Hulk. And in an equally ironic turn, New Captain America now supports Tony, after his predecessor, oh, you know, fought a whole war against him!

As a final tease, Marvel Comics promises “the death of a major character,” most notably “at the hands of another hero.” Whilst the obvious choice would be reversing roles and killing off Stark’s Iron Man, something tells me it might be Spidey that gets squashed- Stark doesn’t take betrayals kindly. Marvel is yet to reveal which hero will fall in the story, and how many months until they’re back on their feet to further add to the suspense.

Civil War 2 will be illustrated by David Marquez and Justin Ponson. Marvel is yet to announce a release date, but the series will launch at some point in 2016.

Meanwhile, Captain America: Civil War is due to be released in the UK on 29th April. Watch the trailer below.