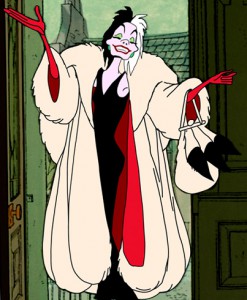 The Hollywood Reporter has exclusively announced that the Easy A star is in talks to play the title role in the film which re-imagines the studio’s classic 101 Dalmatians.

Cruella De Vil was the villain for the classic animation which saw her kidnapping young dalmatian puppies in order to make her own custom dalmatian fur coat. Glenn Close is the most recent actress to take on the role of De Vil in the 1996 live-action comedy that portrayed the character as a fashion icon.

The film currently has no director, but is said to be a priority for Disney with production scheduled for later this year.

Little else is known about the film, except that Kelly Marcel (Saving Mr Banks, Fifty Shades of Grey) is writing the script.

Remind yourself of the classic animation below.