Actor Jason Wingreen, who voiced Boba Fett in Star Wars: The Empire Strikes Back and played bartender Harry Snowden in All In The Family, passed away at his home in Los Angeles on Friday 25th December. 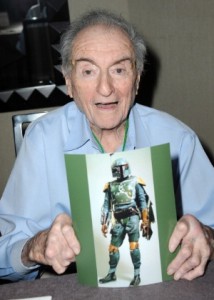 Wingreen was well-known for his role as Harry Snowden in All In The Family (1971 – 79) and it’s continuation series Archie Bunker’s Place (1979 – 83), as well as voicing the part of the popular cult villain Boba Fett in The Empire Strikes Back (1980).

The Brooklyn-native was one of the founders of the Circle in the Square theatre company and made his first two Broadway appearances in the 1954 plays The Girl On The Via Flaminia and Fragile Fox.

He performed in three episodes of the original Twilight Zone series as well as appearing (and, memorably, dying) as Dr. Linke on the 1968 Star Trek episode ‘The Empath’.

He retired after making final appearances on Seinfeld and In the Heat of the Night in the 1990’s. He is survived by his son, two grandchildren, and his sister.