Our first look at Benedict Cumberbatch as Marvel’s mystic superhero, Doctor Strange, has finally been revealed.

Entertainment Weekly unveiled the images as part of their First Look issue, which features Cumberbatch on the cover. The photo shoot, conducted by Michael Muller, marked one of the first times that the British actor had tested his extravagant costume. 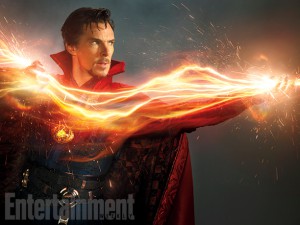 Cumberbatch will star as Dr. Stephen Strange – an arrogant surgeon who becomes a heroic sorcerer. (Image via Entertainment Weekly)

Speaking to EW, Cumberbatch revealed that the photo shoot had been useful in aiding his spell-casting flourishes for the movie: “It was like, okay, I’ve got to keep throwing these poses, these spells, these rune-casting things, everything he does physically. I’m thinking, there’s going to be a huge amount of speculation and intrigue over the positioning of that finger as opposed to it being there, or there. And I’m still working on that.”

EW’s First Look issue also revealed that Mads Mikklesen will be portraying the main antagonist. Marvel’s head honcho, Kevin Feige, revealed that the Hannibal star will play “a sorcerer who breaks off into his own sect.”

Doctor Strange is set to be released in UK cinemas on 28th October 2016. Watch a brief featurette about the film below.