Read more
You are at:Home»News»Global News»Notes on News: Why casting a black actress as Hermione isn’t something the internet should be breaking over
By Carly-May Kavanagh on December 21, 2015 Global News, News

I watched the films and read the books from the age of six, after getting the Chamber of Secrets on VCR one Christmas. I had toys from Woolworths of Harry with magnetic feet on his broomstick and one where air blew out of his hand so he could levitate a Quaffle. I had a robe and glasses when I was seven or eight too. I’d watch the behind the scenes clips to see how they did the spell positionings. I go to platform nine and three-quarters whenever I’m near London. I have a model Timeturner, a vial of Felix Felicis (which I plan to get a tattoo of), Fleur Delacour’s wand and a Hufflepuff shirt that I regularly wear in public (#HufflepuffPride). So to say that I’m a fan would be an understatement.

J.K. Rowling’s new play, Harry Potter and the Cursed Child, which will be staged in two parts, is set to begin its run in 2016. As a Potterhead, I’m so excited to see this play. And in the latest bit of news to come from Muggle Net, it has been revealed that the play has found their 30 year old versions of Harry, Ron and Hermione. This is amazing! But why is the internet breaking over the casting choices? Well, here’s a look at the new cast: 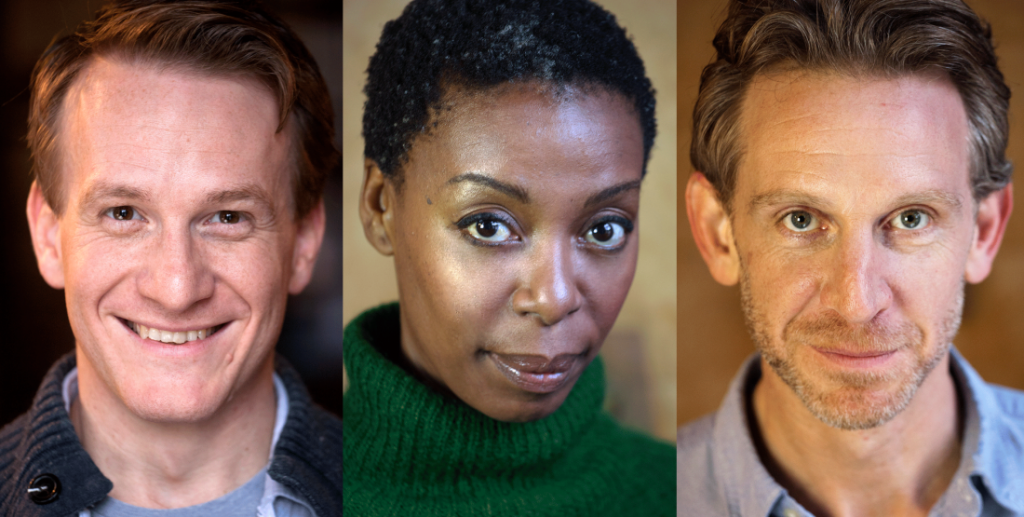 To the right, you can see Ron, played by Paul Thornley. And sure, his hair isn’t ginger, but that’s what hair dye can be used for – the actors who portrayed Fred and George dyed their hair for the films. And then to the left is the actor destined to play 30-year-old Harry, Jamie Parker. I think after film-Harry not having green eyes, we can overlook his brown ones. And then, finally, right in the centre of it all, is our new Hermione. She will be played by Noma Dumezweni, an Olivier award-winning actress, born in Swaziland of South African parents, who moved to England as a child. She’s been in Doctor Who, The Winter’s Tale with the RSC, A Midsummer Night’s Dream, and so many other theatre and TV roles. Now, can you guess why Noma’s casting has caused (unwarranted) outrage on the internet?

“Then two girls appeared in the kitchen doorway behind Mrs. Weasley. One, with very bushy brown hair and rather large front teeth, was Harry’s and Ron’s friend, Hermione Granger”

As you can see, there is no canonised specification that Hermione is white, or that she should be portrayed only by white actresses. In fact, the only time you could possibly think that J. K. Rowling specified Hermione’s skin colour is in Harry Potter and the Prisoner of Azkaban, when Harry and Hermione use her timeturner to rescue Buckbeak and she’s scared of them being seen by Fudge and Dumbledore leaving Hagrid’s hut:

“Hermione’s white face was sticking out from behind a tree. ‘Harry, hurry!’ she mouthed.”

That’s it. That’s the only vaguely white reference there is in the novels. And it should be assumed that here, in context, white-faced means to be pale from fear, ill health or tiredness.

There’s no point in hating on Noma’s characterisation already because of some narrow-minded misunderstanding of the books’ context. Even if you put the matter of race aside, the details of Hermione’s character aren’t universally specific. Sure, Noma doesn’t have bushy hair, but 1) that description of Hermione was when she was younger (“Hermione’s hair was bushy again; she confessed to Harry that she had used liberal amounts of Sleekeazy’s Hair Potion on it for the ball, “but it’s way too much bother to do every day.’”) and 2) women can cut their hair! That’s a thing we’re allowed to do. Shocking, I know.

The internet has had different reactions, of course. There are some who are so happy that a person of colour is playing such a well-known character. Those who trust J. K. Rowling and the casting team are at average levels of happiness. But then, sadly, we also have reactions like this:

“What about choose actors who are like the characters ? Because Harry, Ron & Hermione aren’t like that in the book…”

“And she’s black. I love all people with different skin colors. But they should have stuck with how it was done in the books and movies.” (So, because once art has happened in one way, that’s the only way anything can ever be portrayed!)

“So Hermione is a black woman now? What complete over-the-top PC nonsense is this? Ridiculous…”

As I said, the book does not describe her skin colour, it’s not about political correctness. They haven’t cast a black actress just to have a black actress, she was obviously cast because she was the best for the job. If there had been someone better than Emma Watson for the films and this was the other way around, I’m sure people would still be annoyed at the change.

J.K. Rowling herself has approved the cast and obviously sees characteristics of Hermione in Dumezwemi. She in fact took to Twitter this morning to officially denounce the concern over ‘the canon’ of her novels. So why does it matter if Hermione has been cast as a black woman? Hermione was always described as particularly average – Emma Watson is universally agreed to be beautiful and that was never altered – her teeth were never given prosthetics to be bucked.

Casting isn’t based on how alike an actor looks compared to previous portrayals of that character, but how that specific actor portrays the character through action and emotion – not appearance. Looks are cosmetics that can be easily altered, but the hardest thing is fully portraying the intricacies of the characters – which not everyone can do.

And I admit, I automatically assumed her to be – well, Emma Watson, having seen her portray Hermione in the films, that’s how I saw her in the books. The default assumption of whiteness is an unfortunate, unspoken habit, much like our heteronormative culture, which is why JK Rowling had to tell us explicitly that Dumbledore is gay. In terms of Hermione herself, it seems she’s the perfect person for ‘racebending’, having been depicted black, biracial or Asian online (especially in fanart).  Why? Because in a world that is about the evils of racial supremacy, Hermione is a muggle-born and often the target of racism from pure bloods. She stands up for the oppressed, whether they are people, elves or hippogriffs, she’s female, clever, loyal, brave, and now, in a play that will be widely seen, black.

At least the one thing we can all agree on is that it will be completely magical to see the play, as one thing will always remain true: Hogwarts will always be there to welcome you home.