“Are you ready? Then let the challenge… begin!” 13 years ago today, one of the best children’s game shows ever made was brought forth onto television.

With mystical special effects, a strange Scottish man covered in feathers, and a lot of golden rings to be found through weird and wonderful challenges, CBBC’s Raven was the pinnacle of interactive fantasy gaming.

The show first aired on 16th December 2002, before going on to run for a further ten series, as well as its own spin off game. The show, which starred James McKenzie as the eponymous host, also won multiple BAFTA awards for its innovative and imaginative gameplay for children and teenagers to compete in. 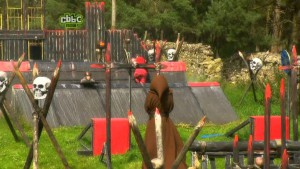 Contestants went up against several challenges that tested their physical and intellectual agility.

The premise of the game was to collect as many golden rings as possible, whilst losing as few lives – with teams of six adolescents competing against each other to gain the title of ‘The Ultimate Warrior.’ Those who came last after the challenges of each day would face ‘The Way of the Warrior’ – a grueling, but utterly absorbing elimination test (that only four people ever completed) which involved an elaborate set up of foam swords and wooden shields attempting to throw the contestant to the ground.

A fun test of agility, strength, cunning and intelligence – Raven was one of the best of its time, providing a modern day throw back to gameshows such as Knightmare. Fantasy television that people could really get involved with hasn’t been as prominent since; probably because nothing could live up to its standard – though with the steady rise of Game of Thrones and other epic fantasy storylines taking a hold of the population, hopefully something just as good is around the corner.

Remind yourself of the show’s brilliance in the video below… and “may the luck of the Raven’s eye be with you!”