Sarah Paulson will be reprising her character from the first season of American Horror Story: Murder House in the season finale of AHS: Hotel. 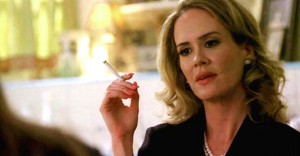 The character was last seen in the show’s debut season. (Image via Google)

In an exclusive article on Entertainment Weekly, it was revealed that Paulson will appear as her psychic character, Billie Dean Howard.

Howard was a prominent character in season one as the confidante of fan favourite/villain, Constance (Jessica Lange).

According to EW, Billie Dean has had much success since Murder House, having developed her own reality TV series which focuses on her psychic abilities. Her abilities lead her to stumble into the Hotel Cortez, which proves to be a prime setting for her show.