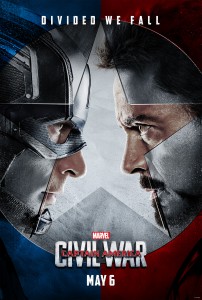 The film oversees a brutal conflict between Captain America (Evans) and Iron Man (Downey), as they find themselves on opposite sides of a debate to legislate superhero identities. After the fallout of Avengers: Age of Ultron, the government (led by The Incredible Hulk‘s General Ross) campaigns to make sure that those with super-powerful abilities are regulated.

However, the heroic Cap, who still worries about the ultimate outcome of the SHIELD/Hydra era, finds himself fighting the system – and some former allies –  alongside the recently revived Bucky/The Winter Soldier (Sebastian Stan) and Falcon (Anthony Mackie).

Directed by the Russo brothers, Captain America: Civil War is set to be released on 29th April 2016.