The first official photo for the upcoming Wonder Woman solo-outing has been revealed after filming began earlier this week. 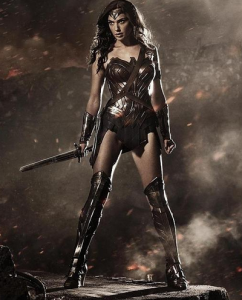 Gadot will make her first appearance as Wonder Woman in Batman v Superman: Dawn of Justice in March 2016. (Image via Google)

Gal Gadot – who will first appear in the iconic role in DC’s upcoming Batman v Superman film – took to Twitter to share the image of the heroine, noting: “75 years in the making… #WonderWoman is underway.” The image depicts Gadot wrapped in a dark cloak that conceals most of the heroine’s colourful costume, whilst also coyly showing off her infamous gauntlets and armoured tiara.

The iconic London landmark, Big Ben, can also be seen in the background of the new image. According to Warner Bros, the film will see the super-heroine (otherwise known as Diana Prince) pop up in several European locations including the UK, France and Italy.

Warner Bros have also revealed several new cast-members, who are set to join Gadot and her previously announced co-star Chris Pine in the upcoming superhero epic. Among the new stars are Robin Wright, David Thewlis, Danny Huston, Ewen Bremner, Saïd Taghmaoui, Elena Anaya and Lucy Davis. Character details have yet to be revealed.

Directed by Patty Jenkins, Wonder Woman is set to be released in the US on 23rd June 2017. A UK release date has yet to be announced.

Catch your first glimpse of Gadot’s superhero in the trailer below.