The resonating friendship between a cowboy doll and a space ranger action figure first blossomed 20 years ago today, when Toy Story was released in US cinemas on 19th November 1995.

Toy Story was the first feature-length computer animated film, as well as the first (and arguably best) theatrical film to be produced by Pixar. Written by the likes of John Lasseter, Andrew Stanton, Joel Cohen, Alec Sokolow and Joss Whedon, the story and characters of this film have truly survived the test of time and are still relatable today.

To recap, Toy Story follows a group of anthropomorphic toys who belong to a young boy named Andy. They pretend to be lifeless whenever he, or any other human is present. The story focuses on the relationship between Sheriff Woody (Tom Hanks), the cowboy leader of the gang of toys and the newest addition to Andy’s toy collection, Buzz Lightyear (Tim Allen) – an impressive space ranger action figure who Woody fears will replace him. 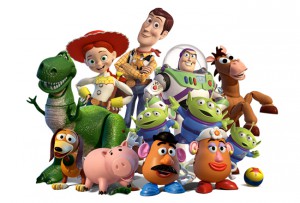 Woody and his gang of anthropomorphic toys including Buzz, Jessie and Bullseye. (Image via Pixar Studios)

When it was first released in 1995, the film received many positive reviews – all of which praised the new style of computer animation used by Pixar, as well as the screenplay’s innovative approach to entertain both children and adult in a universally enjoyable viewing experience. The film also received a 100% approval rating on Rotten Tomatoes – a statistic unheard of in today’s times!

Due to the incredible success of Toy Story, with its likeable characters and touching storyline themed around being left behind or replaced, the film has spurned two sequels, which introduced audiences to Woody’s round up gang: Jessie the cowgirl, Bullseye the horse and Stinky Pete the Prospector, as well as a villainous strawberry-scented teddy bear named Lotso.

Both the original film and it’s subsequent sequels have been an unbelievable victory for the animation studio, having inspired a plethora of merchandise that includes toys, video games, theme park rides and spin-off short films. A third sequel is also currently in the work, and all because the world can’t get enough of these beloved characters.