Read more
You are at:Home»News»Global News»Nostalgic News: Harry Potter and the Goblet of Fire released 10 years ago today
By Caitriona Hanly on November 18, 2015 Global News, News

Harry Potter and the Goblet of Fire was released 10 years ago today on 18th November 2005.

Based on the novels by J.K. Rowling, The Harry Potter film franchise followed the story of a school-aged wizard who unwittingly becomes a key player in an evil overlord’s plot to control the magical world in a reign of terror. The overwhelming popularity of the franchise made it so iconic that it has effectively defined a generation, who since the first film in 2001 (or indeed the first novel in 1997) have meticulously followed the magical and mischievous adventures of three young wizards in the ultimate battle of good and evil.

The fourth instalment of the series, The Goblet of Fire follows Harry as he is forced to compete in the prestigious, yet treacherous Triwizard Tournament. However, the young wizard soon discovers that the games have been intricately designed to place him as a pawn in Voldemort’s scheme to return to power. Full of whimsical scenes and witty one-liners, the film explores the trials and tribulations of young love, as well as the eternal struggles of adolescence that even occur in a fantasy setting. Although this was an area of acting weakness (particularly for main actor, Daniel Radcliffe), it’s easy to overlook because, way back when the film was released, most of us were mere schoolkids ourselves and could relate – making it a heartwarming watch, even now. 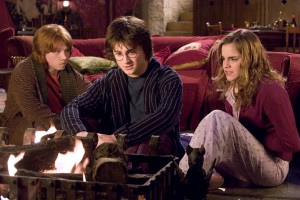 The film saw Harry take on darker perils as he entered his fourth year at Hogwarts.

At this stage in the series, the films also started to turn towards darker themes, which is exemplified in Ralph Fiennes’s performance as he brings to life the sadistic Lord Voldemort. The Goblet of Fire sets the scene for the series to delve into themes of bigotry and how fear and power can lead to corruption. But as always, the artistic flare of the film manages to shine a glimmer of hope. The infamous tagline has since echoed as the series progressed from this iconic instalment: “Dark times lie ahead and there will be a time when we must choose between what is easy and what is right.”

The film also contains scenes that are fairly ambitious for a movie production, which justifies the $150,000,000 budget spent on the movie. Such efforts were proved to be worth it as the box office earned the second largest profits of the franchise at the time. The film also raked in $896,911,078 worldwide, making it the highest earning film of 2005. The film ran an impressive 20-week stint in cinemas, receiving highly positive reviews that eloquently sang the praises of the actors, directors and the visually outstanding special effects.

It’s almost hard to believe that this film was released 10 years ago! Time surely flies (almost as quickly as the sleek Firebolt broom that Harry whizzed across the big screen on). But for all the Harry Potter fanatics out there, Hogwarts will always be home.