Read more
You are at:Home»News»Global News»Nostalgic News: The Little Mermaid was released 26 years ago today
By Georgia Simpson on November 17, 2015 Global News, News

26 years ago today, the world met the most adorable red-headed, singing mermaid in Disney’s animated adaptation of The Little Mermaid, which was released on 17th November 1989.

Based on the Danish fairytale by Hans Christian Andersen, The Little Mermaid tells the story of a 16 year old sea princess called Ariel, whose one wish is to trade her fins for human legs after she falls in love with the human Prince Eric. After making a deal with the sea witch Ursula, in which she trades her distinguished voice for human legs, Ariel has only three days to walk on land and make Eric fall in love with her. 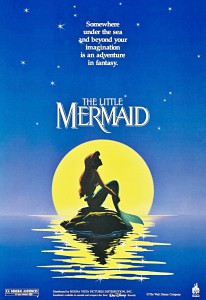 One of the highlights of the film is it’s celebrated soundtrack, composed by Alan Menken and Howard Ashman. The Broadway-esque album included the moving ballad ‘Part of Your World,’ as well as upbeat pieces like ‘Kiss the Girl’ and ‘Under the Sea’. The soundtrack went on to have great success in 1990, having received a total of three Academy Award nominations – making it the first Disney animated film to be nominated for an Academy Award since The Rescuers in 1977. The film won the gongs for Best Score and Best Song for the ensemble piece ‘Under the Sea.’

The film is often given great credit for bring new life into the Disney pantheon after a string of commercial flops in the 1970’s including The Black Cauldron, The Great Mouse Detective and The Fox and the Hound.

On release in 1989, The Little Mermaid received positive reviews and grossed $211 million at the worldwide box office. The film also broke The Land Before Time’s record of highest grossing animated film at the time. This achievement marked the beginning of the era widely known as the Disney Renaissance that the studio went on to create with the likes of Beauty and the Beast, Aladdin and The Lion King.

Remind yourself of the beloved underwater animation in the trailer below.