Charlie Sheen has confirmed that he is HIV positive in an emotional TV interview that aired earlier today.

The former Two And A Half Men star spoke to Today‘s Matt Lauer, revealing that he had been diagnosed with the illness almost four years ago. Sheen also stated that part of the reason why he has only now made his diagnosis public is to “put a stop” to the “very, very harmful” stories that have been circulating in the press about his health.

“I’m here to admit that I’m in fact HIV positive and I have to put a stop to this onslaught, this barrage of attacks and of sub-truths, and very, very harmful and mercurial stories that are about, that are threatening the health of so many others – which couldn’t be further from the truth,” he said. 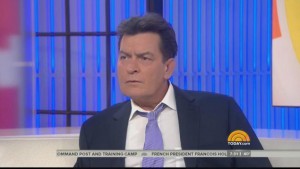 The actor revealed his diagnosis on the Today show in America. (Image via Youtube)

“It started with what I thought, based on this series of cluster headaches and migraines and sweating the bed, completely drenched. I was emergency hospitalised, I thought I had a brain tumour. I thought it was over. After a battery of tests, and spinal taps… they walked in the room and said, ‘Here’s what’s going on’. It’s a hard three letters to absorb, you know? It’s a turning point in one’s life.”

The actor also revealed that people have attempted to blackmail him with the information, adding: “I have paid those people – not that many… but enough to bring it into the millions. What people forget is that that’s money they’re taking from my children… They think it’s just me, but I’ve got five kids and a granddaughter, you know?”

Sheen stated that he was not “entirely sure” how he had contracted the virus (which is different to AIDS), but when asked about the stigma of living with HIV, he said: “I have a responsibility now to better myself and to help a lot of other people, and hopefully with what we’re doing today, others may come forward and say, ‘Thank you for kicking the door open’.”

The actor completed the interview on a positive note: “I’m going to ride this wave of support, and if there’s one guy on this planet to contract this that’s going to deliver a cure, it’s me. I’m not going to be the poster man for this, but I will not shy away from responsibility and opportunities that drive me to help others.”

Watch a portion of the interview below.