It’s always heart-warming to hear a story that sheds a little hope in the face of a tragedy; A 25-year old man who suffered a terrible accident on the London DLR and lost two of his limbs, is set to receive a prosthetic limb inspired by his favourite game franchise.

James Young, is an avid gamer and thanks to his strong-minded attitude, he is staring into his completely changed future with the determination not to let the misfortune of his accident ruin his most beloved of hobbies. Over the past few years, he has become adept at playing games one-handed – proof of what the power of sheer will and self-belief can do. But now, Mr. Young may not need to play one-handed anymore… 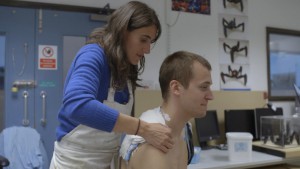 The Konami Corporation is a Japanese company that manufactures toys and games, including one of Mr. Young’s personal favourites, Metal Gear Solid V. The company has formally announced they will be starting a new, innovative project in collaboration with a leading prosthetics company in order to give Mr. Young a prosthetic arm replacement influenced by the bionic characters in Metal Gear Solid V.

This “Phantom-Limb” is part of the Alternative Limb scheme which allows victims to take part in the design of their new limbs to match their personalities. The project is headed up by one of the UK’s finest prosthetic designers, Sophie de Oliviera Barata. She strives to produce hyper-realistic limbs and chose Mr. Young as one of her candidates because she believes that a unique prosthetic will be suited to his tastes and may bring him a little comfort.

Mr. Young’s personal project is due for completion in January 2016 and a documentary will be aired following James’ story, as he adapts to the bionic arm and makes progress through recovery. For more information on The Phantom Limb project, visit their blog.