Six years ago today, on 9th November 2009, the popular comedy character Miranda hit our screens in the show of the same name.

After a successful stint on Radio 4 under the guise of ‘Miranda Hart’s Joke Shop’, the show made the successful transition to BBC Two in November 2009, featuring the eponymous character and all her friends that were first introduced to us through the radio show. Three series and two specials later, as well as a change of channel from BBC Two to BBC One, the character and show have become a much loved addition to contemporary British TV, with over 11 million of us tuning in to the opening episode of the show’s third series in 2012. 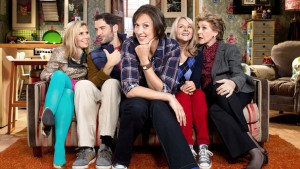 Although Miranda Hart has now become a part of British culture, what should not be forgotten is the supporting cast that helped to create the success that is Miranda, the show. Sarah Hadland’s portrayal of Miranda’s long suffering friend Stevie stands out, as does Patricia Hodge who played Penny – Miranda’s overbearing mother. And of course, there is also Miranda’s on/off love interest Gary (portrayed by Tom Ellis). Between these four key characters was (and is) a great atmosphere and chemistry that only strengthened our love for the show – “such fun!”

It’s not just a successful show among viewers either; it has been very well received by critics too. Garnering nominations at awards ceremonies including the Royal Television Society, BAFTA and the National Television Awards, Miranda has received several prestigious British Comedy Awards, as well as some international acclaim at the Monte Carlo Television Awards.

Although the show seems to have come to an end for now, Miranda Hart has never ruled out a return to our screens as Miranda. So though we live in hope for another appearance from these characters, for now we will just have to be content with the three series and two special episodes we have, which are (thankfully and regularly) repeated on TV.

Station Manager of Surge Radio, third year English student and just love being a part of the media!