Developed by Harmonix, Guitar Hero brought the well-known gameplay we’ve all come to recognize from similar franchises such as Rock Band to the mainstream. The game features a guitar shaped controller (modeled after a Gibson SG), that is used by the player to simulate guitar strumming. 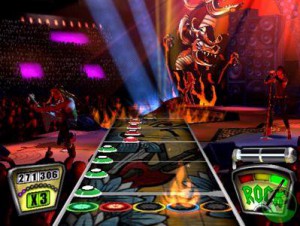 The player presses coloured buttons on the neck of the controller in time with the notes of a song when they appear onscreen. The player presses the buttons to simulate the use of frets on a guitar, whilst strumming the controller in time to the music in order to score points. The goal of the game is to score as many points as possible, whilst keeping the virtual audience excited. The game also attempts to mimic features of playing a real guitar, using techniques such as hammer-ons and pull-offs and the use of a whammy bar to alter the pitch of the notes being played.

The gameplay is similar to it’s major inspiration, GuitarFreaks. GuitarFreaks is considered to be the game that laid the foundation for games such as Guitar Hero and Rock Band, and is also considered one of the most influential video games of all time.

In both games, the player has a large catalog of songs to choose from to play, with Guitar Hero featuring 30 popular rock songs spanning five decades of rock music, with the addition of bonus tracks. The game featured songs such as ‘Iron Man’ by Black Sabbath, ‘I Wanna Be Sedated’ by The Ramones, ‘Spanish Castle Magic’ by Jimi Hendrix’, ‘Bark at the Moon’ by Ozzy Osbourne, ‘Crossroads’ by Cream and ‘Fat Lip’ by Sum 41. Unlike later games in the franchise, the first instalment featured covers of songs rather than the actual band featured. All songs are credited “as made famous by” the original band.

Guitar Hero became a surprise hit within the gaming community, earning itself critical acclaim and becoming one of the most influential games of the first decade of the 21st century. The game’s initial success launched the Guitar Hero franchise – a series that has spurned eight major releases – six Guitar Hero games, two DJ Hero games and Band Hero – with five expansions on gaming consoles. The franchise has also transferred over to Windows and Macintosh systems, mobile phones, the Nintendo DS (Guitar Hero: On Tour) and an arcade game.

A new instalment of the series, Guitar Hero Live, is set to be released this October. It is the first new title of the series in five years, and is considered to be a reboot of the series.

Remind yourself Guitar Hero’s gameplay below.