The John Lewis Christmas advert is one of the biggest highlights of the build up to Christmas. Always filmed beautifully and with a touching message, this year is no different.

A lonely old man living in a crater on the moon is the unlikely focus of John Lewis’s Christmas advert this year, as the department store puts a charitable spin on its latest multi-million pound campaign.

Amid increasing hype around John Lewis’s seasonal ad, which has come to mark the beginning of the Christmas shopping season for many, the department store will aim to use its profile to raise hundreds of thousands of pounds for Age UK. It will also encourage staff and customers to join up with their local branch of the charity to care for elderly people who might otherwise be alone over the holiday.

The retailer has once again spent £7m on a campaign that ranges from the slick TV ad to a smartphone game and merchandise, including glow in the dark pyjamas, as well as areas decked out like the surface of the moon in 11 stores. 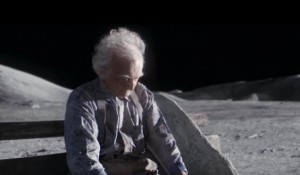 the retailer is tugging at the heartstrings with story of a young girl, Lily, who spots an old man living in a shack on the moon through her telescope. The determined child tries sending him a letter and firing a note via bow and arrow, before floating him a present of a telescope tied to balloons, which finally enables them to make contact.

The ad’s strapline is: “Show someone they’re loved this Christmas”, which echoes Age UK’s own campaign: “No one should have no one at Christmas”. Profits from three products – a mug, gift tag and card – will go to the charity.

“The charity really resounds with people at this time of year, and the ad … lends itself to thinking about someone who lives on your street that might not see anybody,” said Rachel Swift, Head of Marketing at John Lewis.

The campaign, which broke on social media today and will premiere on TV in a two-minute slot during Gogglebox on Channel 4 this evening, features the Oasis track ‘Half the World Away,’ best known at the theme tune for The Royle Family TV show, but in this case reinterpreted by little-known Norwegian artist Aurora.

Directed by Kim Gehrig, the woman behind the This Girl Can ads for Sport England, the ad came to a total cost of £1m to make. The moon scenes were shot at the Warner Bros Leavesden studios near Watford, where the Harry Potter films were made, and the specially built set was created by one of the team behind the latest Star Wars film, The Force Awakens.

As in the last few years, John Lewis has drummed up interest in this year’s ad with a teaser campaign on TV and social media using the hashtag #OnTheMoon. A full moon will fall on Christmas Day this year – a complete coincidence, according to Swift.

Last year, the retailer also spent £7m on a campaign featuring an animated penguin and a young boy playing together to the tune of John Lennon’s ‘Real Love,’ sung by British singer-songwriter Tom Odell. It had drummed up 22 million views on YouTube by the first week of January – ahead of the 16.6m clocked by Sainsbury’s ad featuring first world war soldiers sharing a bar of chocolate, the UK’s next most popular ad last year.

Swift said that, despite the hype, John Lewis had stuck to the same strategy for the last five years. “It’s all about thoughtful gifting and going the extra mile for someone you love at Christmas,” she said. “We don’t go into it thinking, ‘This is going to be huge,’ just getting something right for the brand at this time of year and something we hope customers really love.”

Among those fighting for attention in this year’s flurry of Christmas ad, sister chain Waitrose launched its Christmas ad online on social media on Wednesday, ahead of a TV debut during The X Factor on Sunday night. This year it has used the agency, adam&eveDDB, which has created John Lewis’ Christmas ads for years.

Burberry launched only its second festive film earlier this week, featuring Romeo Beckham and Elton John, while electrical chain Currys drafted in Jeff Goldblum for its first ever dedicated Christmas ad. Asda and Lidl launched their campaigns at the beginning of this month, while Morrisons launches its campaign on Friday morning.