Following a series of teasers, Disney has released the first trailer for Alice Through The Looking Glass.

The sequel to 2010’s $1 billion-grossing box office success, Alice In Wonderland, sees Mia Wasikowska and Johnny Depp reprising their roles as Alice Kingsleigh and The Mad Hatter, respectively. Helena Bonham Carter (the Red Queen), Anne Hathaway (the White Queen) and Matt Lucas (Tweedledee and Tweedledum) all return too. You can even spot Barbara Windsor’s little mouse in there somewhere. 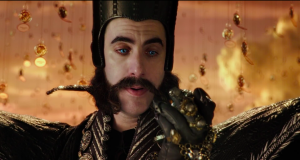 Sacha Baron-Cohen plays a villainous personification of Time in the new film.

Tim Burton hasn’t returned to the director’s chair, but instead serves as a producer on the sequel, which is directed by James Bobin (Flight of the Conchords, The Muppets). Alice In Wonderland screenwriter, Linda Woolverton, once again provides the script.

Filled with comic moments, dark twists and (of course) opulent costumes, the trailer is a mix of old and new. Though based on Lewis Carroll’s own sequel to Alice’s Adventures In Wonderland, many of the events that occur in the novelisation of Through The Looking Glass were explored in the previous film, namely; the checkerboard references, the white queen and the Jabberwocky. So quite how Woolverton has managed to adapt a new plot with the old classic, is still, as yet, a mystery.

Alice Through the Looking Glass opens in cinemas on 27th May 2016. Watch the teaser below.