Read more
You are at:Home»News»Global News»Collins English dictionary reveals it’s word of the year for 2015
By Natalie Fordham on November 5, 2015 Global News, News

Collins English Dictionary has chosen ‘binge-watch’ as its 2015 Word of the Year. For all of you hidden away obsessively streaming Breaking Bad, The Unbreakable Kimmy Schmidt, Pretty Little Liars, Game of Thrones, Friends or Grey’s Anatomy over and over again should be ashamed of yourself. You are responsible.

Meaning “to watch a large number of television programmes (especially all the shows from one series) in succession,” the word reflects a marked change in viewing habits, due to subscription services like Netflix. Lexicographers have also noticed that its usage was up by 200% in 2014. Other entries include ‘dadbod’, ‘ghosting’ and ‘clean eating’. 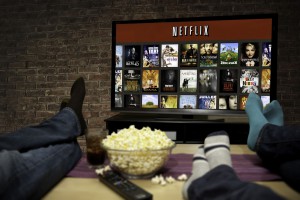 The rise of streaming services like Netflix have developed the word’s usage in popular culture.

Helen Newstead, Head of Language Content at Collins, said: “The rise in usage of ‘binge-watch’ is clearly linked to the biggest sea change in our viewing habits since the advent of the video recorder nearly 40 years ago. […] It’s not uncommon for viewers to binge-watch a whole season of programmes such as House of Cards or Breaking Bad in just a couple of evenings – something that, in the past, would have taken months – then discuss their binge-watching on social media.”

Those partaking in binge-watching run the risk of ‘dadbod’, one of ten in the word of the year list. Referring to an untoned and slightly plump male physique, ‘dadbod’ is not without its admirers, with actors like Seth Rogen and Leonardo DiCaprio fitting the purported brief. “Once again, the list of Collins’ Words of the Year offers a fascinating snapshot of the ever-changing English language,” said Newstead.

The full list of Collins’ Words of the Year, plus definitions, are as follows

Those words that remain popular could be included in the next print edition of the Collins English Dictionary, which is due to be published in 2018.