Read more
You are at:Home»News»Global News»First images from Fantastic Beasts And Where To Find Them are revealed
By Rehana Nurmahi on November 4, 2015 Global News, News

Potterheads, it’s time to get even more excited! Fantastic Beasts and Where to Find Them have released two new images from the upcoming spin-off film, including a glimpse at the logo, and the first image of main star, Eddie Redmayne in character.

The swish new logo for the film was released yesterday (3rd November), and features subtle yet slick references to the magical world; such as a wand underlining some of the words, and the use of a dragon in place of the ‘S’ in ‘Beasts’. 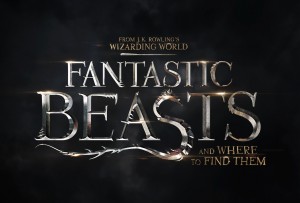 Above: The film’s swish new logo.

The release of the logo marks the start of a new online presence for the film, with production creating specialised social media accounts in anticipation of the film’s release.

The other image, provided exclusively by Entertainment Weekly, offers us a first glimpse at the film’s main protagonist, Newt Scamander –  an explorer whose expertise lies in Fantastic Beasts, and, you guessed it, where to find them.

Directed by Harry Potter alumni David Yates, the film takes place 70 years prior to the events of J.K Rowling’s novels, with this first film of the spin-off franchise set in New York. Filming began a couple of weeks ago, with the likes of Katherine Waterston, Ezra Miller and Ron Perlman also joining in on the magic.

With these images come an intensified amount of excitement within the Harry Potter fan community, especially in the wake of next year’s play, Harry Potter and the Cursed Child, which was announced to an extremely positive response.

Fantastic Beasts And Where To Find Them is set to be released on 18th November 2016. Remind yourself of some of J.K Rowling’s magical creatures in the video below.