Read more
You are at:Home»News»Global News»Star Trek is returning to television in 2017
By Anneka Honeyball on November 2, 2015 Global News, News

Following the monumental success of the recent cinematic reboots of the series, Star Trek will finally be making a welcome voyage back to television.

CBS has announced that Alex Kurtzman (a producer on J.J Abrams’ reboots) is attached to the new series, serving as an executive producer. The latest television-made interpretation of Gene Roddenberry’s classic series will premiere its first US episode on the CBS Television Network in 2017 – not long after the original series turns 50. 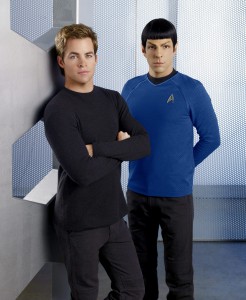 The most recent continuation of the franchise has seen Chris Pine and Zachary Quinto take on the roles of Kirk and Spock in film reboots. (Image via Google)

Speaking of the new series, David Stapf, President of CBS Television Studios, said: “There is no better time to give Star Trek fans a new series than on the heels of the original show’s 50th anniversary celebration. Everyone here has great respect for this storied franchise, and we’re excited to launch its next television chapter in the creative mind and skilled hands of Alex Kurtzman, someone who knows this world and its audience intimately.”

The series will introduce a number of new characters into the Star Trek universe. However, unlike Marvel’s current trend, CBS have confirmed that the new TV show will not be related or interconnected with the rebooted film franchise.

After its premiere, the series will then be available exclusively in the US on CBS’s digital subscription VOD and live streaming service All Access. It will also be distributed around the world by CBS Studios International.

Gene Roddenberry’s original series first aired in 1966, starring William Shatner and the late Leonard Nimoy as Captain Kirk and Commander Spock. The franchise has since lived on through a number of films, TV-spin offs and reboots. The latest film, Star Trek Beyond, is set to be released on 22nd July 2016.

Watch a clip from one of the franchise’s most popular spin-off series, Star Trek: The Next Generation, below.