“A little ‘Bohemian Rhapsody’ gentlemen?” One of the most iconic rock songs of all time was released 40 years ago today on 31st October 1975.

Written by the late, great Freddie Mercury, ‘Bohemian Rhapsody’ has long been one of Queen’s most popular hits, beloved in the world of music and pop culture. The track was released in 1975 as the lead single for the band’s fourth studio album, A Night At The Opera, and we haven’t stopped singing it since.

Due to it’s incredible six-minute running time – which contains an acapella intro, ballad segments, a hard rock guitar solo, an operatic passage and a reflective coda – it was the most expensive single ever made at the time of its release. The track is also distinctive for being a song without a definitive chorus, opting instead to segue into bigger, crazier tonal changes as it continues. 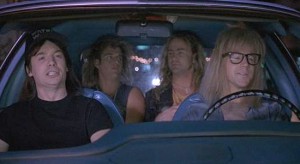 The song also lended itself to one of the greatest car scenes in the history of cinema. (Image via Youtube)

It’s operatic section is perhaps the track’s most iconic segment, if only for it’s incredulous lyrics: “I see a little silhouetto of a man, scaramouche, scaramouche, WILL YOU DO THE FANDANGO? Thunder bolt and lightning, very very frightening, me! (Galileo) GALILEO, (Galileo), GALILEO, GALILEO FIGARO.”

When the song was released, it was a commercial success, staying at the top of the UK single charts for nine consecutive weeks and selling over a million copies by the end of January 1976. It also reached number one again when it was re-released in 1991, making it the the UK’s third best-selling single of all time after Elton John’s ‘Candle in the Wind’ and Band Aid’s ‘Do They Know It’s Christmas?’

In addition to its incredible commercial success, the song’s effect on popular culture has been phenomenal – with one of the most famous and beloved references being in the 1992 cult comedy, Wayne’s World. The track features in the scene where Wayne, Garth and their friends are driving on the way to their favourite diner, opting to mosh/sing-along to the classic song as they cruise along the streets of Aurora, Illinois. The studio originally wanted to play a Guns ‘N’ Roses track during this segment of the film, but writer and star Mike Myers insisted upon using ‘Bohemian Rhapsody’ – to the point where he threatened to quit production if the track wasn’t used.

The track has also been covered by a plethora of well-known stars including Kanye West, P!nk, Panic! at the Disco, and even the Muppets.

Remind yourself of the iconic tune below.