Read more
You are at:Home»News»Global News»Notes on News: Are broadcasters pushing the watershed limit?
By Caitriona Hanly on October 30, 2015 Global News, News

Earlier this week, ITV was put under scrutiny for its new show Jekyll and Hyde. The fantasy period-drama series follows the story of the emotionally troubled Robert Jekyll as he explores his cursed family history and battles his inner demons. Followed by harrowing monsters and shadowy government forces, the story of Mr. Jekyll is a tense tale to keep any viewer on the edge of their seat. And it is this very nature of the programme that has left many viewers vigorously exclaiming that the content is not suitable for a pre-watershed slot.

The broadcasting watershed refers to a time cut-off, wherein it is generally accepted that “adult content”can be aired, due to the late hour that is unlikely to affect a general audience – and in particular, young children. For many stations (including ITV), this watershed is set at 9pm. However, in excess of 500 viewers complained to ITV through the regulatory authority Ofcomand over social media to express their outrage at the graphic violence shown in the primetime program – deeming it inappropriate for children. Responses have focused on the viewpoint of concerned parents, claiming that the imagery used in Jekyll and Hyde is “too scary for their kids.” From the outset, the first episode features depictions of frightful monsters and scenes of murder, so it is somewhat understandable for someone to question the graphic detail in some of these scenes. 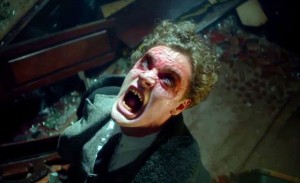 But is this public outcry really an overreaction? The programme had been advertised for weeks before it was first aired. Not only did the trailer for the series strongly imply that the show would contain dark storylines and mildly violent scenes, but ITV also stated it outright before the 6.30pm airing time. In spite of this undeniably clear advertising, there were no headlines of complaints being submitted before the series premier.

Is it not a little curious that very few suspected the nature of this programme before they chose to watch it? The programmes that we choose to watch, and those that a parent chooses to allow their children to watch are just that – a choice. Defensive replies have indicated that anyone had the opportunity to turn off the programme or switch the channel if they found Jekyll and Hyde to be too disturbing to continue watching.

Another argument risen is about the use of on-demand shows. Despite being a highly popular service which allows people to catch-up on shows they missed live, there is very little policing in place to determine a time in which adult shows can be watched online. Many are proclaiming that if anyone can watch a rated-18 programme at any time of day, it could almost be argued that in this day and age – in which many of the younger generation are spending increasing amounts of time on the internet –  that a watershed is almost an outdated concept. I tend to disagree with this view as we should still be aiming to protect those that are most vulnerable to intense imagery. It is still necessary to maintain a watershed, but such a clamour to scenes that are no more outrageous than other films and programmes out there may be a step too far.

ITV have pushed the air-time of Jekyll and Hyde back half an hour but have refused to reschedule the programme to air after the watershed. The notion that ITV is purposefully disregarding the watershed may just well be a fallacious conclusion. The show is based on a famous novel of the same title by Robert Louis Stevenson, and is a classic, well-known gothic story. Surely then, many viewers should have been aware of the series’ impending gruesome storyline. But nevertheless, the rating of this programme as “family-friendly” is a controversial concept and certainly raises the issue of addressing clarification on so-called “family horror.” 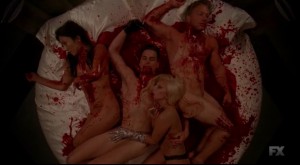 Netflix favourite, American Horror Story, has also come under fire from anguished parents after the premier of its latest series.

Though I think that it’s comforting to see this level of public involvement in a concerning matter, on this occasion, many viewers are merely arguing for the sake of it and joining in on the “mob-mentality” that can develop when enough people are yelling loud enough. Is it fair to put this program into the spotlight when many of today’s most popular shows involve scenes of tense action and thriller plot lines? Whilst I agree that the public should be able to trust broadcasters’ advertising, it should be understood that if warnings are given about content, they should be headed to – trust works in two directions after all.

So, has ITV pushed the watershed limit? I think it is reasonable to assume that the general public can assess for themselves a personal preference of watching (or allowing children to watch) programmes such as this. Although several hundred complaints have been received, it should also be noted that over three and half million viewers tuned in to the opening episode and the majority have not been raising alarm bells. Will the borderline-violent displays in Jekyll and Hyde be used to set an example to all broadcasters or will the public be called to simply calm down and make a choice as to whether they watch the rest of the series or not? Either way, we will be watching very closely.