Read more
You are at:Home»News»Global News»Nostalgic News: Rebel Without A Cause was released 60 years ago today
By Sophie McEvoy on October 27, 2015 Global News, News

The groundbreaking film, Rebel Without a Cause is celebrating its 60th anniversary today.

The Hollywood classic was released sixty years ago today, on 27th October 1955. Since its release, the film has achieved cultural significance largely due to the appearance of James Dean in what is inarguably his most celebrated role. Sadly, Dean died in a tragic car crash a month before the film’s release, but his role as the disillusioned teen, Jim Stark helped to cement his status as a cultural icon from the 50s and beyond. 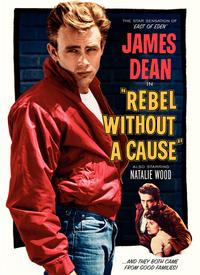 The iconic movie poster for Rebel Without A Cause

Directed by Nicholas Ray, Rebel Without a Cause was adapted from the 1944 book, Rebel Without a Cause: The Hypnoanalysis of a Criminal Psychopath. Written by psychiatrist Robert M. Lindner, the book contains the case study of an imprisoned teenage psychopath in the post-war years. The film does not reference the book in any way, except for using the character of Jim Stark as the disillusioned and rebellious teen.

Stark is the new kid in town due to his aforementioned traits, and hopes to serve some purpose in his life and find a love that he doesn’t get from his family. He finds solace and eventual love in his romance with Judy (Natalie Wood) and a friendship with Plato (Sal Mineo), but he still feels as though he has to prove himself in switch-blade fights and dangerous car races.

Rebel Without a Cause was added to the Library of Congress’s National Film Registry in 1990 and was deemed to be “culturally, historically, and aesthetically significant.” At the time of its release, the film dealt with the moral decay of the middle-class American youth in the 1950’s, critiqued parenting and explored the familiar differences between generations of children and their parents.

The real beauty of Rebel Without a Cause is that it is as relevant today as it was in the midst of the fifties. Stark struggles with problems and issues that still reverberate 60 years later in today’s youth – whether it’s the confusion of growing up and figuring out where you fit in, the tumultuous relationships with parents or dealing with certain insecurities. The term ‘timeless’ gets thrown around a lot within the film community, but Rebel Without a Cause certainly wears the term with a distinct sense of pride.

Here’s a fan video that in my humble opinion, really encapsulates the brilliance of Rebel Without a Cause.