It has been announced that the long-awaited Sherlock special will be heading to our screens on New Years Day. 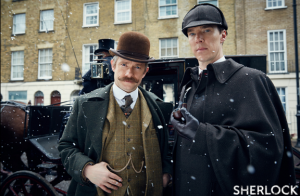 The panel also revealed some new images from the special. (Image via BBC)

During the panel, Gatiss also reassured fans that despite this traditional twist on the contemporary series we all know and love, that the special “is very much in the same style and humour as our Sherlock.” He also teased: “there’s something in the special which was a sheer delight from beginning to end. You’ll know it when you see it…”

Starring Benedict Cumberbatch and Martin Freeman, the special will also be available to watch on the big screen, with several UK cinemas participating in the event. Tickets will be available to book from Monday 2nd November.

Meanwhile, the highly anticipated fourth season of the show – which will hopefully pick up from the agonising cliffhanger left at the end of series three – is set to begin filming in Spring 2016, with Moffat and Gatiss currently writing the scripts.

Sherlock: The Abominable Bride will air on Friday 1st January 2016 on BBC One. Watch a new extended trailer below.