To mark the DVD release of Jurassic World, the film’s Mosasaurus was unleashed near the Oxo Tower on the South Bank in London. 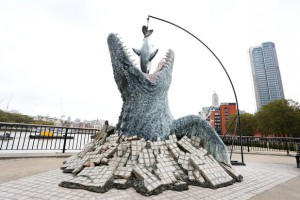 The Mosasaurus is now at London’s South Bank emerging from the River Thames. (Image via Google)

The seven-metre high structure, featuring the dinosaur eating a great white shark – as it does in the film – was unveiled on Monday (19th October).

The structure was created in Cardiff by Wild Creations, who also created the velociraptor display at Waterloo Station during the time of the film’s cinema release in June.

Jurassic World producer Frank Marshall attended the unveiling and commented: “It is the biggest creature brought to life on screen in all the Jurassic films and the detail in which it has been created here today is just jaw-dropping.”

Jurassic World was the highest-grossing film of the summer, earning $1.6 billion worldwide and becoming the third highest grossing film of all time – knocking Marvel Avengers Assemble from the top three.

Following its phenomenal success, director Colin Trevorrow announced that a sequel will be released in the UK on 7th June 2018. Jurassic World is available to buy on DVD and Blu-ray now.