Southampton’s very own Nuffield Theatre has won the accolade for Best Design at this year’s UK Theatre Awards.

Alongside Liverpool’s Everyman & Playhouse Theatre, their production of The Hudsucker Proxy managed to stave off the competition at Sunday’s (18th October) award ceremony and take home the title of Best Design. 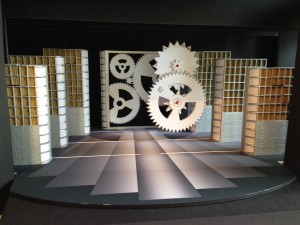 Above: A glimpse at the production’s award-winning set design. (Image by Clare Park)

The stage play, based on The Coen Brothers’ film of the same name, ran at the Nuffield back in May, and featured set design by Dick Bird, Lighting design by Paul Keogan, and video design by Timothy Bird.

In a press release, the Nuffield described how the art-deco style of the production resulted in “bold sets that included the giant machinery of a clock tower, a brightly illuminated art deco lift and massed filing cabinets that turn into drink dispensers.”

Speaking of the venue’s win, Nuffield Director, Samuel Hodges said: “It’s brilliant to have won this prestigious award from UK Theatre. It was a real honour to have such talented designers in the building, underpinning our ongoing commitment to bold and innovative design and designers, alongside playing host to this year’s Linbury Prize.”

For more information about the Nuffield and its award-winning productions, visit their website.