Read more
You are at:Home»News»Global News»Latest promo for The X-Files revival series is released – watch
By Sophie McEvoy on October 20, 2015 Global News, News

The latest promo for next year’s X-Files revival debuted last night (19th October) during Gotham, and it looks as though the world’s most avid believer is starting to question his beliefs. 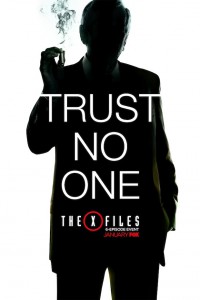 Above: The Cigarette Smoking Man takes up a new poster.

The new 30-second trailer is full of new footage that hasn’t been shown in the array of previous promos, including narration by none other than our favourite conspiracy theorist Fox Mulder (David Duchovny) asking: “What if our work, the X-Files, everything we’ve been led to believe in, is a lie?”

Other pieces of footage show Mulder and Scully (Gillian Anderson) back in action, flashing their badges and torches for the first time since 2001 – inter cut with familiar scenes that have been teased in previous clips.

Monday night also saw the sudden leak of four X-Files promos, one of which ended up being the one shown during Gotham. Each promo remained unfinished, with clear time stamps and comments attached to some of the footage for further editing. The promos were taken down within 10 minutes, but showcased an array of new footage and dialogue, including a possible sighting of Mulder and Scully’s son, William.

Fox also released a new poster for the series on Monday, debuting a glimpse of the infamous Cigarette Smoking Man.

The tenth season of The X-Files will air on 28th January 2016. Watch the new promo below.