Bring out the Bolly and rejoice sweetie-darlings! The long-awaited Absolutely Fabulous movie has finally started shooting.

The comedy, which follows on from Jennifer Saunders’ hugely popular BBC series, will see the comedienne reprise her role as the extravagant Edina Monsoon. Joanna Lumley will also be returning as Eddie’s fabulous partner in crime, Patsy Stone. 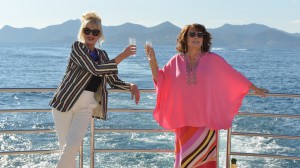 Above: The first official image from the film. (Image via Digital Spy)

Series regulars Julia Sawalha, June Whitfield and Jane Horrocks will also be starring in the film, alongside confirmed cameos, Kathy Burke and Kelly Hoppen (of Dragon’s Den fame). Additionally, it has been rumoured that Kate Moss may appear in the movie.

Speaking of the film, Saunders said: “I am thrilled and excited to finally start filming. We are all taking our medication and hoping for the best.”

Filming will take place over seven weeks on locations in both the UK and the South of France. The plot will follow Eddie and Patsy as they flee to the French Riviera, following a major incident at a fashionable launch party for which they were responsible.

Absolutely Fabulous: The Movie is set to be released at some point in 2016. Watch a clip from the series’ 20th anniversary special below.