We’ve known that the film would be coming for nearly three years, and now it’s less than two months away. For ages, we have been without a truly official poster for the latest Star Wars film, having been given only one teaser poster, and several (now far too many) essentially product-based posters, released at the same time as the tidal wave of other merchandise was. 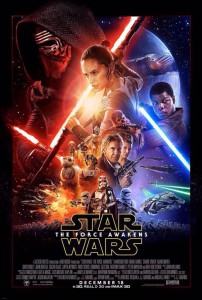 Above: The fully sized glory of the new poster.

But those days are no more! The official poster for The Force Awakens has finally been revealed to the world, and hot damn, it’s gorgeous.

The divide between Rey’s staff and Kylo Ren’s lightsaber is just perfect. And what’s more, is that front and centre of the visible faces on the poster is a female character (Daisy Ridley as Ren) and a person of colour (John Boyega as Finn) – which really succeeds in marking this out as a new film that is as much for new audiences, as it is for old ones.

There’s been so much focus paid to Kylo Ren, the stormtroopers, and BB-8 in all the toys and promotional marketing, that its just great to see the new heroes as close to front and centre as possible.

We also get our first look at Princess Leia (Carrie Fisher) – seen behind Harrison Ford’s Han Solo – and intriguingly, a huge Death Star-esque space station. There is however a noticeable absence in the lack of Luke Skywalker (Mark Hamill).

With the latest and likely final trailer due to hit sometime around 12:01am on Tuesday (20th October), we can’t wait to see the mystery box that surrounds this film finally opened up.

Star Wars: Episode VII – The Force Awakens is released in the UK on 17th December 2015. Watch the trailer below.