Stephen Fry has announced that he is quitting his job as host of the popular BBC panel show, QI.

After 13 years and over 180 episodes of helming the primetime favourite, the beloved author and comedian will be leaving the show at the end of the upcoming ‘M’ series. He will be replaced by fellow comedian and QI regular, Sandi Toksvig, with Alan Davies remaining as a regular panellist. 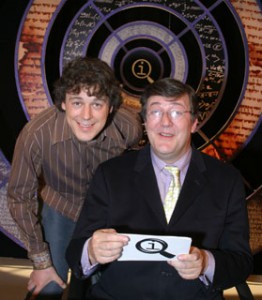 Fry has been at the helm of the popular panel show since 2003, alongside regular panellist, Alan Davies. (Image via Google)

Speaking of his resignation from the series, Fry said: “For 13 years I had one of the best jobs on television. Behind the camera, squadrons of quite extraordinarily brilliant researchers, programme makers and uniquely curious (in both senses of the word) people making that job so much easier. In front of the camera generations of lively minds and above all of course the wonder of nature that is Alan Davies.”

“After passing the alphabetical halfway mark I thought it time to move on,” he continued. “I will never cease to be grateful to John Lloyd for devising QI and for everyone else for making it such fun.” The show’s creator, John Lloyd described Fry’s departure as “the end of an era.”

“It’s been a thoroughly delightful experience,” Lloyd said. “After more than 40 years in broadcasting, QI has been by far the most enjoyable show it has been my privilege to produce, and Stephen has been its big, beating heart. Though we are all very sad he’s decided to move on, I am confident that we have found the perfect person to occupy his gigantic shoes. Sandi will be the first female host of a mainstream comedy panel show on British television – an appointment that is well overdue.”

Speaking of her new position on the show, Toksvig stated: “Stephen has been utterly brilliant with the first half of the alphabet. Now I look forward to picking up the baton, mixing my metaphors and sailing towards the Land of Nod (ie. Z). Who knows what lies ahead? It should all be quite interesting.”

Fry’s long-held position on the show has made him a national treasure, beloved by audiences and critics alike – despite the fact that he only stepped in to host the pilot as a last minute replacement for Michael Palin n 2003.

Fry’s last series as host and Quizmaster begins on BBC Two on Friday 16th October. Watch a clip from the last series below.