Read more
You are at:Home»News»Global News»George RR Martin werewolf book to be made into TV series
By Natalie Fordham on October 12, 2015 Global News, News

George RR Martin is having another one of his novels turned into a TV series.

The Game of Thrones writer has announced on his blog that his Supernatural story, Skin Trade – which he originally wrote for the 1989 horror anthology Night Vision 5 – has had a script order from Cinemax. 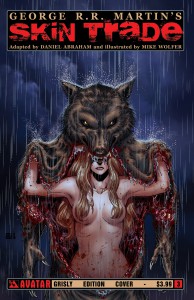 Above: The novel’s cover.

The show’s synopsis reads: “A collections agent who happens to be a werewolf and his friend, a private investigator, discover a dark secret behind a series of grisly murders in their decaying industrial city.”

The Hollywood Reporter writes that Martin has “always thought there was a TV series” in the story, suggesting that there could be a lot of mileage in the concept. The series will be executive produced by Martin, Mark B Newbauer, Kalinda Vazquez, Vince Gerardis, Paul Sansone, Rich Angell and Lisandro Cruz.

Vazquez, who has previously worked on Prison Break and Once Upon A Time, will also write the script for the show in a decision that Martin has praised. “Kalinda’s take on the story and the characters blew me away,” he wrote on his blog. “She loves the story and the world, and really seems to get Willie and Randi, and her pitch to Cinemax was one of the most polished and professional I’ve ever heard. I love her enthusiasm, and look forward to working with her.”

But don’t worry Game of Thrones fans – Martin also added that he could not write the script himself due to his commitment to writing a certain upcoming novel. The author also recently denied rumours that a Game of Thrones movie is in the works.