Never one to take the easy path (professionally speaking), it has been revealed that the ever-enigmatic FKA Twigs’s next project will be to help score a star-studded stage production.

Having already captivated the entertainment world with her unique take on low-key pop in debut album LP1, along with that much-discussed relationship with Robert Pattinson, the 27-year-old has joined Oscar-winning director Danny Boyle, alongside a plethora of A-list talent, to write music for his returning play about the struggles of children growing up in rural townships in South Africa. 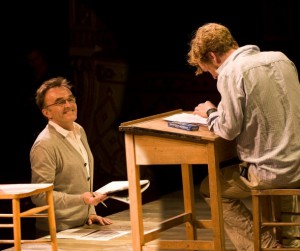 Above: Rehearsal’s for the upcoming show.

Joining Twigs in the one-off production entitled Children’s Monologues, are the likes of Nicole Kidman, Benedict Cumberbatch, Chiwetel Ejiofor and Kit Harington – among many others.

The actors will be reading real monologues from children living in the rural township of Rammultosi and will cover topics from AIDs to growing up, with all proceeds from the one-off production going to Boyle’s charity Dramatic Need.

Speaking to The Guardian about the play, Boyle said: “You don’t always want to know these things are going on in the world, especially to children, but when those actors get up on stage in London it will mean that another thousand people hear those stories, and that those kids really have a hell of a voice.”

The Children’s Monologues will be performed at the Royal Court Theatre on Sunday 25 October. Tickets are available here.