The 1975 have released their newest single, ‘Love Me.’ 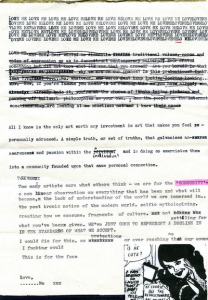 The group’s essay about the track, art and being in a band. (Image via Twitter)

As the song received it’s first play, the group posted the lyrics on Twitter, alongside an essay in which they expressed their thoughts on art and being in a band: “Too many artists care what others think – we are for the ‘COMMUNITY'” it says. “I would die for this, as pretentious or over reaching as that may sound. I f*cking would. This is for the fans.”

The band’s frontman, Matt Healy, recently revealed that their much-anticipated second album would be released at some point in 2016. The group first found fame in 2013 with their self-titled debut.

The 1975 are going on tour this November, playing 16 dates at venues across the country, including our very own Southampton Guildhall on the 21st.

You can hear the full track, as well as the band’s interview with Annie Mac, on the BBC Radio 1 website. Listen to a snippet of the song in the video below.